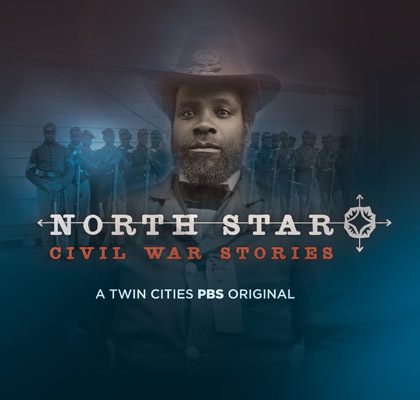 Four stories bring to light the hidden histories of African American Minnesotans during and after the Civil War. These unsung heroes made unique contributions to the Union and their new state, but the details and records of their involvement still challenge historians.

Created for not only the broadcast viewing audience, but also with educators and classroom audiences in mind, this important documentary will be made available on DVD for use in schools, universities, and to the general public.

For a preview of the documentary, see the TPT website at http://www.tpt.org/north-star-civil-war-stories/.

Featured image above: A. Van Spence, courtesy of The Meeker County Historical Society

Daniel Pierce Bergin is Senior Producer & Partnership Manager for Twin Cities Public Television. He was a Production Fellow for the PBS documentary Slavery by Another Name, which premiered at the Sundance Film Festival. Bergin won a regional Emmy Award for Slavery By Another Name: Behind the Scenes. His other notable productions include regional Emmy-winners Asian Flavors, North Star: Minnesota’s Black Pioneers; Lowertown: The Rise of an Urban Village; Cass Gilbert: Standing the Test of Time. His literary history documentary, Literature & Life: The Givens Collection was named “Best History Documentary” at the Prized Pieces International Black Film Festival. His documentary With Impunity: Men & Gender Violence was named “Best Documentary of 2012” by Mpls/St. Paul Magazine. In addition to long-form documentary work, Bergin received a regional Emmy award for Legacy Letters, a PSA series about celebrating and protecting Minnesota’s natural, historical, and cultural heritage. Bergin produced exhibit videos for the Science Museum of Minnesota’s award-winning touring exhibit “Race: Are We So Different?” He also produced a companion program for broadcast.

The Minneapolis native and University of Minnesota graduate has served as a director on the boards of several community media organizations including Intermedia Arts, St. Paul Neighborhood Network, Hennepin Theatre Trust, and IFP MN. He was on the Walker Art Center’s Parent Advisory Council. Daniel is an adjunct instructor at St. Cloud State University. He has been recognized as a MN State Arts Board Fellow, a 2003 Twin Cities Business Journal’s “40 under 40”, a City Pages Artist of the Year, attended the esteemed PBS Producers Academy, and was awarded a Bush Leadership Fellowship for his work in community media.

William (Bill) Green received his B.A. in History from Gustavus Adolphus College, and his M.A., Ph.D. and J.D. from the University of Minnesota. He has published articles, op-ed pieces, and book chapters on history, law, and education, and he has published two books on race and civil rights in Minnesota history-A Peculiar Imbalance in Early Minnesota: 1837-1869, and Degrees of Freedom: The Origin of Civil Rights in Minnesota, 1865-1914, which won the 2015 Minnesota Book Award-Hognander Prize. He is presently working on a history of Minnesota during the period of the Civil War and Reconstruction.

He presently serves as vice president of the Minnesota Historical Society, and is currently on the faculty of Augsberg College.

This project has been financed in part with funds provided by the State of Minnesota from the Arts and Cultural Heritage Fund through the Minnesota Historical Society.

Thank you to Landmark Center for their support of this program.

Click on the titles for more information.
Please note that topics and speakers may change. Check the website and our Facebook page for updates.
Please also note presentation location and times.