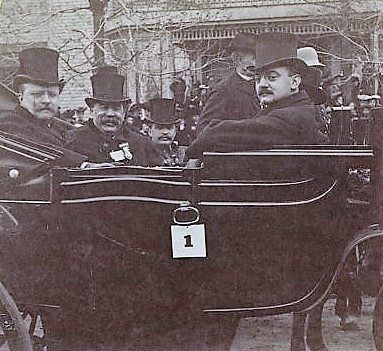 As part of his “Tracing TR’s 1903 Train Trip Tour,” author James Blase will be presenting the history of Teddy Roosevelt’s train trip throughout the country in the spring of 1903, one that culminated in a stop at the Grand Canyon. Blase’s new book, Keep it for Your Children: Theodore Roosevelt’s 1903 Western Trip, creates a first-person journal of a 66-day western train trip the President made during his first term in office, in 1903 – a year after the Landmark Center first opened its doors. The train trip included a stop in Saint Paul, where Theodore Roosevelt arrived by train at 2:30 pm on April 4, 1903, and where the President spoke to a crowd estimated at approximately 50,000 outside the Cedar Street side of the State Capitol. Late in the afternoon the President travelled to Minneapolis, where he attended a banquet and made a speech at the Nicolette Hotel.

Jim Blase’s presentation, complete with photos, will cover the entire 66-day trip, but he will be emphasizing the President’s stops in Saint Paul and Minneapolis. The presentation is being made in conjunction with a two-week Amtrak western “loop tour” train trip Jim Blase will be making, beginning in St Louis Missouri (the “Gateway to the West”) on July 1, and continuing through New Mexico, the Grand Canyon, Southern California, Oregon, Montana, North Dakota and Minnesota, culminating back in St. Louis. The tour’s route mirrors much of the President’s in 1903.

Signed copies of Keep it for Your Children: Theodore Roosevelt’s 1903 Western Trip, Blase’s 390-page book, the title of which derives from the President’s May 6, 1903 speech at the Grand Canyon, will be available at a discounted price.

See the History Revealed 2019 information page for updates and a list of programs.
Or check our Calendar for these and other programs at the Gibbs Farm, and more!