History Revealed: The Art & History of the Persistence Exhibition 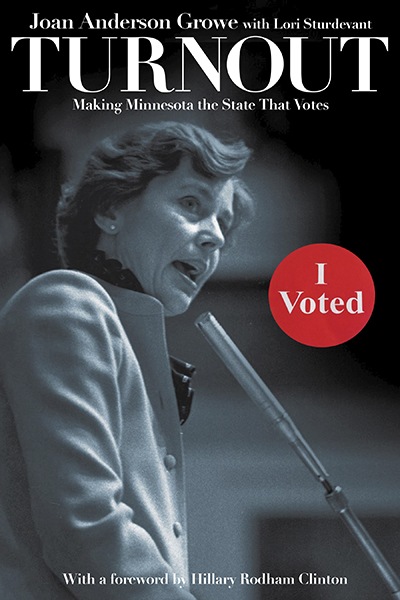 Live presentation on Zoom
Register in advance for this meeting:
Register here on Zoom

After registering, you will receive a confirmation email containing information about joining the meeting.
The presentation will be recorded.
Please note that registration emails will be shared to Ramsey County Historical Society and the East Side Freedom Library. If you do not wish to share your email, contact events@rchs.com.

In Turnout, the architect and chief promoter of Minnesota’s high voter turnout tells her story, showing how hard work and cooperation made the state a leader in clean, open elections.

High voter turnout in Minnesota is no accident. It arose from the traditions of this state’s early Yankee and northern European immigrants, and it has been sustained by wisely chosen election policies. Many of these policies were designed and implemented during the twenty-four-year tenure of Minnesota secretary of state Joan Anderson Growe.

In inspiring and often funny prose, Growe recounts the events that framed her life and changed the state’s voting practices. She grew up in a household that never missed an election. After an astounding grassroots feminist campaign, she was elected to the state legislature in 1972; two years later, she was elected secretary of state, the state’s chief elections administrator. As one of the nation’s leading advocates for reliable elections and convenient voting, Growe worked with county officials to secure Election Day registration (used for the first time in 1974) as a Minnesota norm. She brought new technology into elections administration and promoted motor voter registration. And as an ardent feminist, she has encouraged and inspired scores of other women to run for office.

Joan Growe and co-author Lori Sturdevant will discuss the book and Ms. Growe’s time in office with a talk that is part political history and part memoir, and a reminder to Minnesotans to cherish and protect their tradition of clean, open elections.

“No matter what issue you care about, the right to vote is central. And the fight to protect that fundamental right is the single greatest fight of our time. That’s why we need a twenty-first-century civil rights movement devoted to claiming, enforcing, and defending the right to vote. Joan Anderson Growe has given us an excellent guide for that work.”
from the Foreword by Hillary Rodham Clinton

Joan Anderson Growe served as Minnesota’s secretary of state from 1975 to 1999. Widely known as an expert on voting and elections, she has served as an official election observer in various foreign elections.

Lori Sturdevant, a retired Star Tribune editorial writer, is the author of several books of Minnesota history, including Her Honor: Rosalie Wahl and the Minnesota Women’s Movement.