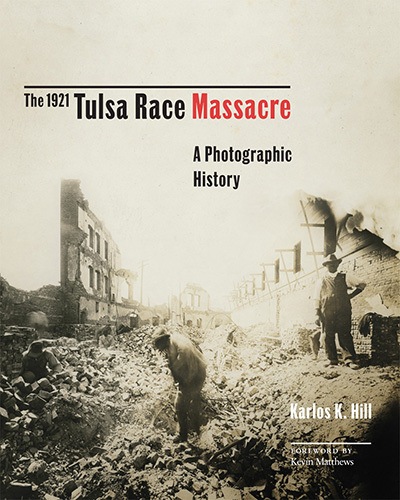 Join us for this very special History Revealed program with Karlos K. Hill, author of the new book, The 1921 Tulsa Race Massacre: A Photographic History, on the centennial of the event in Tulsa, OK.

On the evening of May 31, 1921, and in the early morning hours of June 1, several thousand white citizens and authorities violently attacked the African American Greenwood District of Tulsa, Oklahoma. In the course of some twelve hours of mob violence, white Tulsans reduced one of the nation’s most prosperous black communities to rubble and killed an estimated 300 people, mostly African Americans. This richly illustrated volume, featuring more than 175 photographs, along with oral testimonies, shines a new spotlight on the race massacre from the vantage point of its victims and survivors.

Historian and Black Studies professor Karlos K. Hill presents a range of photographs taken before, during, and after the massacre, mostly by white photographers. Some of the images are published here for the first time. Comparing these photographs to those taken elsewhere in the United States of lynchings, the author makes a powerful case for terming the 1921 outbreak not a riot but a massacre. White civilians, in many cases assisted or condoned by local and state law enforcement, perpetuated a systematic and coordinated attack on Black Tulsans and their property.

Despite all the violence and devastation, black Tulsans rebuilt the Greenwood District brick by brick. By the mid-twentieth century, Greenwood had reached a new zenith, with nearly 250 Black-owned and Black-operated businesses. Today the citizens of Greenwood, with support from the broader community, continue to work diligently to revive the neighborhood once known as “Black Wall Street.” As a result, Hill asserts, the most important legacy of the Tulsa Race Massacre is the grit and resilience of the Black survivors of racist violence.

The 1921 Tulsa Race Massacre: A Photographic History offers a perspective largely missing from other accounts. At once captivating and disturbing, it will embolden readers to confront the uncomfortable legacy of racial violence in U.S. history.

Karlos K. Hill is Associate Professor and Chair of the Clara Luper Department of African and African American Studies at the University of Oklahoma and the author of Beyond the Rope: The Impact of Lynching on Black Culture and Memory.
Image of Professor Hill from https://www.ou.edu/cas/afam/faculty-staff

An additional book for families and children grades 3-6, Unspeakable: The Tulsa Race Massacre by Carole Boston Weatherford, illustrated by Floyd Cooper, is available from Lerner Publications at https://lernerbooks.com/shop/show/20776