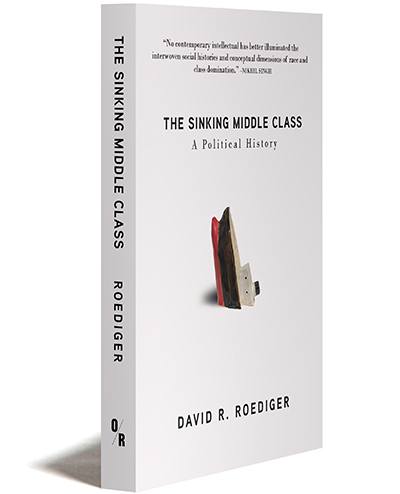 The Sinking Middle Class
A conversation with historian David Roediger

Live presentation on Zoom and streamed on Facebook
Register in advance for this meeting:
Registration: Zoom Registration Page
Registration is limited. You will receive a confirmation email after registering.
For registration or other questions, please email events@rchs.com

“Middle class” is an ideologically shaped and deployed term in American culture and politics. Activist-scholar David Roediger makes clear in his pointed and persuasive polemic, this obsession with the middle-class is relatively new in US politics. It began with the attempt to win back so-called “Reagan Democrats” by Bill Clinton and it was accompanied by a pandering to racism and a shying away from meaningful wealth redistribution that continues to this day.

Drawing on rich traditions of radical social thought, Roediger disavows the thinly sourced idea that the United States was, for much of its history, a “middle-class” nation and the still more indefensible position that it is one now. The increasing immiseration of large swathes of middle-income America, only accelerated by the current pandemic, nails a fallacy that is a major obstacle to progressives.

David Roediger taught in the 1990s at the University of Minnesota and now teaches American Studies at the University of Kansas. His books include Seizing Freedom, The Wages of Whiteness, How Race Survived U.S. History, and Towards the Abolition of Whiteness and Working toward Whiteness. His book The Production of Difference (with Elizabeth Esch) recently won the International Labor History Association Book Prize. He is past president of the American Studies Association and of the Working-Class Studies Association.

Professor Roediger will be joined in conversation by:

August Nimtz, Professor of Political Science and African American Studies at the University of Minnesota. August has been an activist in progressive movements in the Twin Cities (and beyond) since the 1970s with a particular emphasis on solidarity with the people of Cuba.

Kieran Knutson, President of Communications Workers of America Local 7250 (Minnesota AT&T). Kieran has been a long time activist at the intersection of the racial justice and labor movements.

Megan Brown, Assistant Professor in the Masters in Advocacy and Political Leadership (MAPL) program at Metropolitan State University. A geographer by training and trade, Megan has recently found her way to St. Paul.