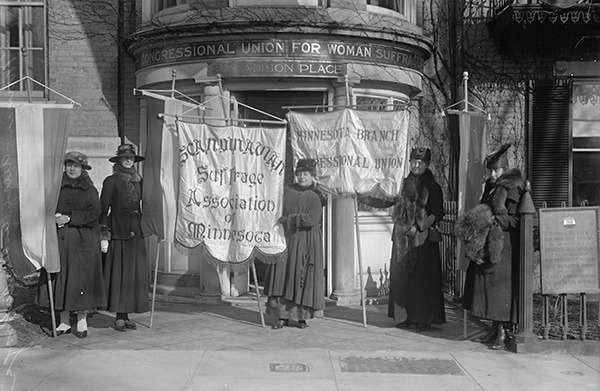 After registering, you will receive a confirmation email containing information about joining the meeting.
The presentation will be recorded.
For registration or other questions, please email events@rchs.com

During the fight for women’s suffrage, Minnesota was home to one of the only ethnic suffrage organizations in the country. The Scandinavian Woman Suffrage Association (SWSA) operated from 1907 to 1919 and used cultural connections to garner support for women’s suffrage at the state and national levels.  Its leaders played on ethnic afficilitation and identity to lobby Scandinavian-American legislators and members of the general public to vote for women’s enfranchisement.  The SWSA had members from all walks of life, serving to counter anti-suffragist claims that suffragists were only elite, society women who did not represent the typical American woman. This talk will detail the history of the SWSA and the ways in which its membership’s varied ethnic and class backgrounds “spiced up” the women’s suffrage movement.
Anna M. Peterson is associate professor of history at Luther College in Decorah, IA. She also serves as editor for the Norwegian-American Historical Association. Her many publications include two articles on the Scandinavian Woman Suffrage Association published in Minnesota History and The Journal of American Ethnic History.
+ Google Calendar+ iCal Export