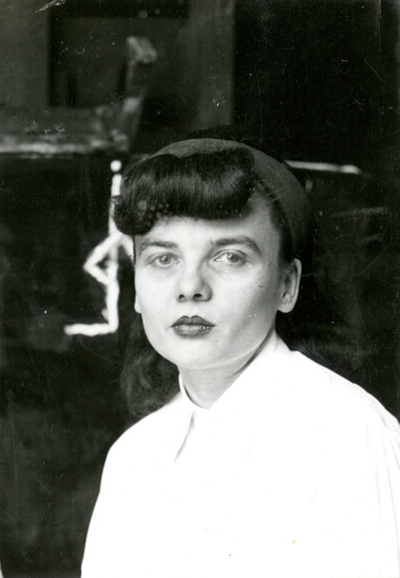 In partnership with the East Side Freedom Library
Live presentation on Zoom
Register in advance for this meeting:https://us02web.zoom.us/meeting/register/tZIqdeyhrDsiGtXe9f_bxxmOQk0vJTnhZ0xQ After registering, you will receive a confirmation email containing information about joining the meeting.
For questions, please email events@rchs.com

The East Side Freedom Library and the Ramsey County Historical Society invite you to our final “History Revealed” for 2021.

Jean Follett grew up on the East Side of St. Paul, served in the U.S. military during World War II, and moved to New York City, where she played an active role in the development of the post-war art scene. In 1962, Follett returned to St. Paul where she joined other local women in the contentious arguments around aesthetics, the roles of art in society, and the roles of gender and the places of immigrants in the art world. These arguments had swirled around the St. Paul School of Art (today the Minnesota Museum of Art, or the “M”) since the Progressive Era (before World War I) and they continued through the Great Depression, World War II, and the Cold War years.

Melissa’s focus on Jean Follett, who has never received the attention her artistic work deserves, provides a window into these arguments and their impact on the art world, including the “applied arts,” architecture, engineering, natural history (including the founding of the Science Museum), art museums, and more, from St. Paul to New York City.

Melissa Rachleff is a Clinical Associate Professor in the Visual Arts Administration Program at NYU: Steinhardt, where she concentrates on the nonprofit sector. In 2017 she curatedInventing Downtown: Artist-Run Galleries in New York City, 1952-1965 for NYU Grey Art Gallery and wrote/edited the accompanying book, which is co-published by the Grey and Prestel Publishing. Melissa began her career as the assistant curator at Exit Art and co-curated exhibitions on the intersection of visual art and documentation. She also worked on exhibits about under-examined artists at mid-career. As a program officer for the New York State Council on the Arts from 1999-2007, Melissa was an advocate in supporting contemporary art projects done in collaboration with local communities. She has written about artist organizations for a variety of publications, and her essay, “Do It Yourself: A History of Alternatives” was published in Alternative Histories: New York Art Spaces (MIT Press) in 2012. For the fiftieth anniversary of 1968, Melissa curated Narrative & Counternarrative: (Re)Defining the Sixties for NYU’s Bobst Library.