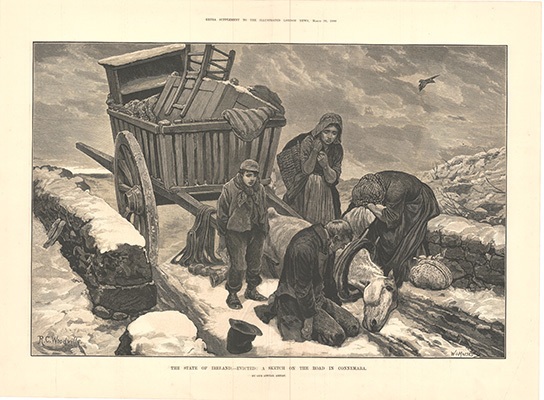 When people living in the Connemara region of Western Ireland were offered assistance to escape from the ravages of famine and disease, they knew little about their new homeland but believed they would find hope and happiness in America. Frail and hungry, they traveled over 3,700 miles to reach their destination, a prairie that scarcely resembled their homeland. While trying to settle and begin earning a living, within months they would encounter one of the worst Minnesota winters ever recorded. The Connemaras’ story, similar to that of many other immigrants, is one of despair, struggle and ultimately perseverance.

Jane Kennedy lives in St. Paul, MN. Her interest in exploring Irish famines is linked to her family’s emigration in the 1880s from County Mayo, Ireland. She has a B.A. in English and Journalism from St. Catherine University and an M.A. in Business Communications from the University of St. Thomas. Kennedy obtained Irish citizenship in 2016 (dual citizenship) following two visits to her grandfather’s homeland in the Belmullet Peninsula, Co. Mayo.

Image: From “An Extra Supplement to the Illustrated London News,” March 20, 1880. The State of Ireland-Evicted: A Sketch on the Road in Connemara. By Our Special Artist. Courtesy of Jane Kennedy.