History Revealed: Black Women’s Struggle for the Right to Vote 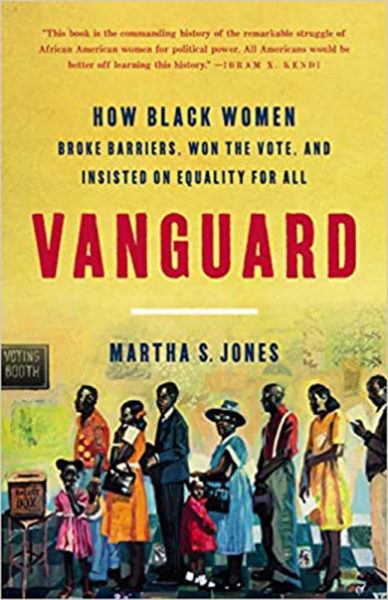 To pre-order the book (out in September) from our partner, Subtext Books, see https://subtextbooks.com/books/pre-order-vanguard-by-martha-jones

Amidst all the turmoil of 2020, it has been easy to forget that this year marks the centennial of the Women’s Suffrage amendment. It has unfortunately also been easy to take the given narrative for all there is to know. In her new book, Vanguard: How Black Women Broke Barriers, Won the Vote, and Insisted on Equality for All, Martha Jones challenges the standard story that the suffrage crusade began in Seneca Falls in 1848 and ended with the ratification of the Nineteenth Amendment in 1920. She details how African American women defied both racism and sexism to fight for the ballot, and how they wielded political power to secure the equality and dignity of all people.

Vanguard rests on careful scholarship, but is written with a wide readership in mind. It is being hailed by scholars and public intellectuals across the country. Jones “is as bold and necessary to our understanding of ourselves as the women in this important work,”writes Tressie McMillan Cottom. “Martha S. Jones reminds her readers that Black women stand as America’s original feminists,” adds Erica Armstrong Dunbar. Henry Louis Gates,Jr., points out that “at a moment when our very democracy is under assault, Vanguard reminds us to look for hope in those most denied it.

Professor Jones is a Professor of History, Johns Hopkins University and a public historian, frequently writing for broader audiences at the Washington Post, the Atlantic, USAToday, Public Books, the Chronicle of Higher Education, and Time, the curatorship of museum exhibitions including“Reframing the Color Line” and “Proclaiming Emancipation” in conjunction with the William L. Clements Library, and museum,film and video productions with the Smithsonian’s NationalPortrait Gallery, the Charles Wright Museum of African American History, PBS, The American Experience, the Southern Poverty Law Center, Netflix, and Arte (France.)