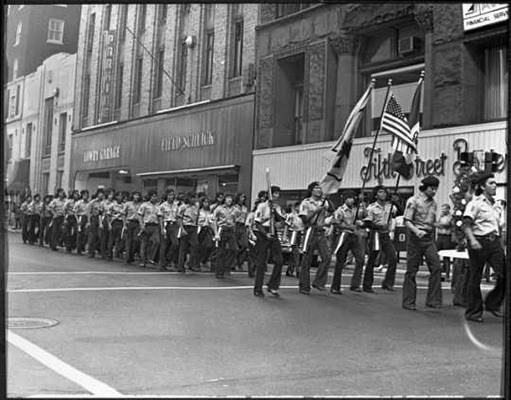 Black, Brown and Red Power in the Twin Cities: Parallels, Intersections and Self-Determination in a Liberal Haven
Dr. Jimmy Patino

In partnership with the East Side Freedom Library & Roseville Library
Live presentation on Zoom
Register in advance for this meeting, register on Zoom here. After registering, you will receive a confirmation email containing information about joining the meeting.
For questions, please email events@rchs.com

The Twin Cities evolved in a unique and dynamic historical conjuncture in the long 1960s as a site in which African American, American Indian and Mexican American communities were concentrated in an otherwise overwhelmingly white state. The emergence of Black Power, the American Indian Movement, and the Chicano Movement parallel and overlapping in a shared urban site speaks to the socio-political context of racialized injustice within a labor friendly and liberal progressive state. This presentation explores the direct and indirect overlap of these constituent communities’ struggles against police violence, inter-residential violence related to concentrated poverty, and physical and cultural displacement. These dynamic movements built infrastructure to confront these shared forms of repression, but through their particular racialized communities: The Way organization in the Black community, Centro Cultural Chicano in the Mexican community, and in several independent schools in the American Indian community. These institutions—also evident in the emergence of the Black Patrol, the AIM Patrol and the Brown Berets in addressing police violence—emerged independently to address the overlapping racial capitalist context and highlighting its differential articulation. However, there were points of convergence and direct interaction, culminating in the struggle for ethnic studies at the University of Minnesota, among others.

Jimmy Patiño is an Associate Professor in the Department of Chicano & Latino Studies at the University of Minnesota.  His book Raza Sí, Migra No: Chicano Movement Struggles for Immigrant Rights in San Diego was published in 2017. He has also written on Mexican American desegregation, African American and Latina/o/x critical thought in hip-hop culture, and is currently writing on ideas about solidarity and anti-capitalist thought across Black, Brown and Red Power Movements.