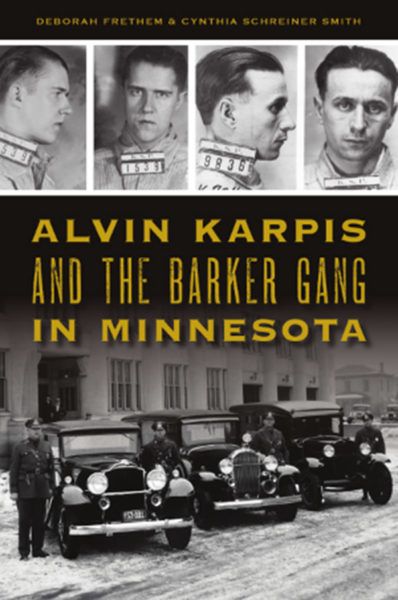 In partnership with the White Bear Lake Area Historical Society.

Live presentation on Zoom
Register in advance for this meeting: Registration Link
Registration is limited. You will receive a confirmation email after registering.
For registration or other questions, please email events@rchs.com

From their home base in Minnesota, the Karpis-Barker Gang cut a swath of crime and terror across the Midwest in the early 1930s. They kidnapped two important businessmen and held them for exorbitant ransoms. They stole payrolls and robbed banks as the bullets flew. Corrupt police and wily crime bosses helped Alvin Karpis and the Barker brothers, Freddie and Doc, every step of the way. Who were these men and women? What made them into killers and kidnappers? How did their reckless lifestyles lead to their downfall? From Ma Barker to Volney Davis to Edna Murray the Kissing Bandit, authors Deborah Frethem and Cynthia Schreiner Smith delve into the crimes, personalities and motivations of one of the most successful and infamous gangs in American history.
Cynthia Schreiner Smith is an actor/writer/producer born and raised in St. Paul, Minnesota, where she still lives in a suburb outside the city. This is her first book, but she he has published short pieces on St. Paul history in the St. Paul Almanac in 2012 and 2014. Since 1998, she has worked as a tour guide for “Down in History Tours” in St. Paul, researching and writing scripts for its historical tours. She is best known there for performing the St. Paul Gangster Tour as Barker-Karpis gang member Edna Murray, the Kissing Bandit. Cynthia and her husband, Bick Smith, are co-owners of CyBick Productions, producing corporate videos and short films. In 2011, they produced Gangsterland, a documentary-style movie about 1930s gangsters in St. Paul.
Deborah Frethem previously published Ghost Stories of St. Petersburg, Clearwater, and Pinellas County with The History Press in 2007, Haunted Tampa: Spirits of the Bay in 2013 and Haunted Ybor City in 2014. She has also written scripts for historical tours in Minnesota and Florida and conducted these tours for more than twenty years. She has a bachelor’s degree in history from Olaf College and has served as tour manager for “Down in History Tours” in St. Paul. She is currently a writer and storyteller, living on a boat in the Mississippi River in downtown St. Paul.